Are you a workaholic or a hard worker? 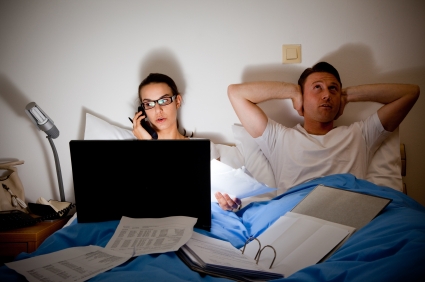 Are you so involved with work that other important behaviors and activities, both personal and interpersonal, are excluded or minimized most of the time?

Is your work the all-encompassing preoccupation in your life? If work is controlling you to the point of self and other defeating extremes, you are a work addict or workaholic.

And like people suffering from other socially accepted addictions, you reinforce your compulsive behavior daily. You may be promoted for your efforts, but there are costs.For example, one study ascertained that 74% of workaholic partners were likely to have affairs, while 48% of workaholics were less likely to have affairs than non-workaholics. The apparent reason why the workaholic has fewer affairs is, predictably, lack of time. However the deeper reason is a wish to avoid the increased demands that an affair would entail. And since the workaholic is minimally intimate with his or her partner, it is understandable that spouses of workaholics would go outside the relationship to find intimacy.

Workaholics have tremendous difficulty expressing their feelings and are given to conflict avoidance, sulking and silence rather than confrontation. They tend to be fearful of any closeness that will bring him or her face to face with emotional intensity and possible rejection. When their partner steps up their needs for intimacy, this tends to further reinforce the workaholics commitment to work hard. Not surprisingly, relationships with people in a work environment are much easier for the workaholic to handle.

The workaholic deals with stress in a variety of ways. Alcohol and caffeine are used and abused primarily for utilitarian reasons. The caffeine lifts the individual into the day, because the work schedule and hours required are viewed as highly demanding. And alcohol acts as a decompression chamber, a way to escape the stress, come down and switch out of work mode.

Doing Therapy With the Workaholic / Characteristics of the Syndrome

When doing therapy with the workaholic, the primary goal is not to get the individual to transform the working habits into a more leisurely framework.

Work to the workaholic is the process by which significant meaning in life is realized. The therapist’s role is not to take away that source of meaning, but to focus on helping the workaholic develop an interpersonal world in which they can experience themselves more fully and relate to others in a more natural and spontaneous manner. Discovering they can be liked and cared for being themselves can result in the workaholic feeling significant and being appreciated in his or her life.

An additional goal of therapy is to assist the workaholic to surrender the addiction, and replace it with the pleasure and significance that work can provide. For the workaholic who has been successfully involved in therapy, work often becomes an arena where spontaneous and creative self-expression can be experienced.

Therapy for the workaholic does not remove work as the source of security in life. Instead, therapy tries to bring meaningful, significant and genuine relationships into the world of the workaholic. Thus, the value of work to this individual is altered; it is no longer the structuring life force, but rather becomes one of many avenues for an individual to enjoy and find meaning in life.

General Characteristics of the Workaholic Syndrome:
There is an over-involvement in the area of preoccupation (work);
The workaholic has the illusion that he or she is indispensable;
The workaholic tends to be viewed in the family as a self-sufficient, highly responsible and highly resourceful individual.

These characteristics receive a great deal of reinforcement throughout childhood.The workaholic tends to hit the floor running. He or she starts the day from the moment the alarm clock sounds, wasting no time easing into the day. Time is planned so that every minute is controlled and scheduled. Emergencies and sudden changes in the schedule are disruptive and not easily handled. The workaholic constantly weighs the effectiveness of daily activities and often keeps a productivity scoreboard. He or she has tremendous difficulty with unfinished business or tasks. If it is necessary to leave work without completing something or at least having it under control, the addict carries the unfinished work home, continues the work on his PC, and frets about it until the task is completed or can be resumed. This often means that social or family activity and sleep are disrupted.The workaholic arrives at work earlier than most people and stays later. Lunch is often eaten quickly, or skipped altogether. If lunch is eaten, it is usually functional and structured around business. This individual is restless and feels as if time is being wasted if he or she does not rush from place to place. They are often (secretly) judgmental of others who do not fit this mold. The workaholic has great difficulty planning, preparing and taking holidays, and when they are taken, they are often cut short. Away from the office, he or she may call the office daily, and for many, at least two calls a day are deemed necessary.The workaholic has little time in his or her schedule for socializing. If it is not work-related, socializing is viewed as a waste of time, especially if it is arranged with people who do not value time as highly as the workaholic.

At the root of this addicts extraordinary work ethic are feelings of inferiority and a fear of failure and of rejection, which fuels his avoidance of close and intimate relationships. A drive for external approval often masks a lack of belief in self-worth and self-acceptance. The tremendous difficulty these individuals have of letting go of routine, out of office hours, is that a sense of extreme emptiness surfaces whenever he or she is confronted by unstructured time.

Earlier in life, a workaholic child’s efforts at limit setting and saying ”no” usually caused intense negative parental reactions and were squashed. Hence learning to set limits helps the workaholic to establish workable psychic space between what he or she ought to do, wants to do, can do and will do.

Therapy can definitely help the workaholic to create more freedom of choice in his or her life. 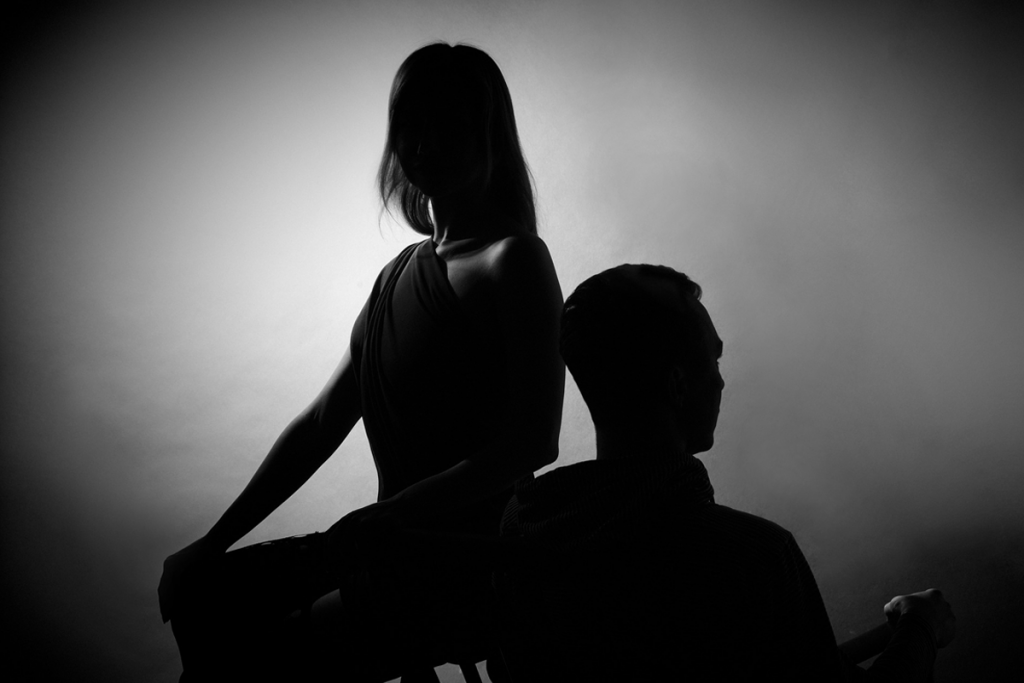 ​No one doubts that setting up and living in Hong Kong puts unrelenting strain on relationships, the kind of strain that brings conflicts to a head after years of simmering.

All of us see the world through the filters of our own wants and values.

It is an over-zealous attachment to our own viewpoints that creates the most difficult power-struggles in any relationship.In either joint and/or individual sessions, my work with couples targets their unmet needs and unfilled expectations, their divided loyalties, fears and modes of miss-communication. Individual expectations for the therapy are also addressed, as well as each person’s experiences in Hong Kong and hopes for their relationship during their time here, and well beyond.

Improving a conflict-ridden or stress-ridden relationship requires flexibility, open-mindedness, shared goals and an appreciation of a partner’s needs and views. Mutual commitment to shared goals over the long-term can lead to settling short-term disputes more effectively with a co-operative, rather than controlling mindset. At a time when personality differences can become gaping, it is crucial to maintain genuine respect and tolerance for your partner’s needs and quirks, and to make allowances for the fact that heavy emotional baggage can spill over under excessive strain.

Even well-matched couples experience conflict, hurt, disappointment and anger. Talking it through and articulating emotions is never more important than during times of strain. Allowing pride and stubbornness to get in your way only creates more difficulties.

Learning to accept each others shortcomings is vital, although not easy. Partners may recognize weak links in their relationship in the areas of showing consideration for each other, willingness to converse about uncomfortable topics and expressing feelings and desires clearly. But in spite of such frustrations, studies show that happier couples never give up on their efforts to co-operate and compromise their way through disagreements.

Shying away from conflict is not the answer. Complaining about your partner’s shortcomings does not indicate an unhappy relationship. It is when complaints create distance, distrust, negativity and a lack of support that the relationship hits trouble.

Voicing discontent freely and openly and dealing with it straight away, rather than allowing it to build up into thunderclouds, can lead to strength in a relationship, noto distance. Open discussion is a sign of ongoing problem-solving.

When caught in a cycle of blame and counter-blame, attack and counter-attack, it is time for partners to acknowledge their more vulnerable feelings beneath the surface anger. (This is often more easily done within the safe context of a therapy session initially.) Many of us do a great job of burying our most tender feelings – those feelings that quietly cry out for intimacy and reassurance and shrink away from being hurt or rejected. But only when these feelings are recognized and expressed can a power struggle be resolved and the road to potential solutions be paved.

So even if you harbor a strong dislike for overt disagreement, you should make every effort to express troubles, concerns and needs clearly and without blame. Then either strive to arriva at a compromise or agree to accept the differences.

Everyone should take responsibility for communicating their desires and making sure they are understood. Concerns, problems, unfulfilled expectations not dealt with do not go away. They simply go underground until they erupt.

No one ever said establishing and maintaining a healthy, mutually supportive relationship was easy. It takes work, especially in over-driven, over-indulgent, frenzied Hong Kong, where career and social pressures can easily overshadow personal priorities. A fulfilling relationship requires a commitment of time, attention, energy and emotional honesty. Not easy.

But it could be worse. You could be setting up in Syria.