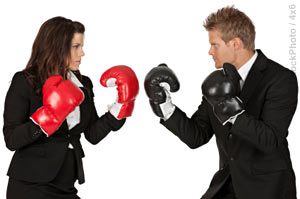 People certainly do battle differently! Some are temperamentally inclined in the heat of an argument to go for the jugular, and attempt to steamroller their “opponent” to their side.

Others talk problems out quietly while many prefer to avoid their problems altogether.Regardless of which style of conflict management a person has developed, recognizing disagreement and engaging in it, even if it is never settled or no compromise is reached, helps couples forthrightly cope with difficult issues.

However, when personal exchanges consistently include damaging forms of negativity, such as criticism, contempt, defensiveness and stone-walling (identified and extensively studied by Dr. John Gottman, the impact on their relationship is ultimately destructive.

This website uses cookies to improve your experience while you navigate through the website. Out of these cookies, the cookies that are categorized as necessary are stored on your browser as they are essential for the working of basic functionalities of the website. We also use third-party cookies that help us analyze and understand how you use this website. These cookies will be stored in your browser only with your consent. You also have the option to opt-out of these cookies. But opting out of some of these cookies may have an effect on your browsing experience.
Necessary Always Enabled
Necessary cookies are absolutely essential for the website to function properly. This category only includes cookies that ensures basic functionalities and security features of the website. These cookies do not store any personal information.
Non-necessary
Any cookies that may not be particularly necessary for the website to function and is used specifically to collect user personal data via analytics, ads, other embedded contents are termed as non-necessary cookies. It is mandatory to procure user consent prior to running these cookies on your website.
SAVE & ACCEPT